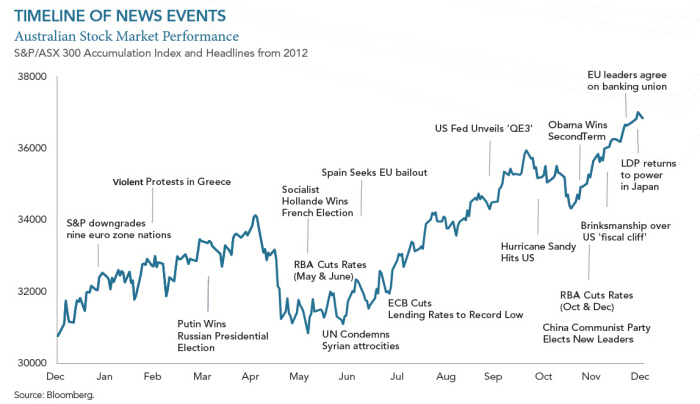 The above chart tracks the performance of the Australian share market over 2012 against some of the major news events of the year. These headlines are not offered to explain market returns. Instead, they serve as a reminder that investors should view daily news events from a longer-term perspective, and avoid making investment decisions based solely on the news.

The year was again dominated by the on-going euro sovereign debt crisis. Earlier in 2012, there was intense speculation that the euro would cease to exist before the year was out and that the European Union itself would fall apart. That didn’t happen. In July the European Central Bank pledged to do whatever it took to save the euro. And by year’s end, the markets’ worst fears were subsiding.

While Europe struggled with recession and high unemployment, the US economy showed evidence of upward momentum through the year. Meanwhile, China showed signs of a mild recovery toward the end of 2012. In Japan the newly re-elected Liberal Democratic Party came to power promising renewed fiscal and monetary policy stimulus to boost growth.

In 2012, investors watched eagerly for signs that the US recovery was gaining steam. The weak economy was the central focus in the presidential election, and the debate raged over what combination of policies would lead to higher growth and job creation.

US unemployment fell over the year, from 8.5% to 7.8%. At the same time corporate earnings and balance sheets improved, inflation stayed low, while housing, car sales and manufacturing activity strengthened.

The deal reached on the “fiscal cliff” cancelled broad tax increases and postponed large spending cuts that could have pushed the US economy back into recession. 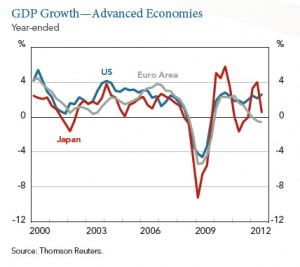 The European sovereign debt crisis carried over into a third year and reached a flashpoint in mid-2012 when Spain threatened to go the way of Greece.

The turning point was agreement by EU leaders to push towards greater fiscal, banking and political integration. The European Central Bank’s announcement that it was prepared to buy an unlimited amount of government bonds also soothed markets.

Until this past year, China had picked up the slack from sluggish growth in the US and Europe. An export dependent nation, China was showing signs of succumbing to the slowdown in Europe as its growth rate slowed to 7.4% – the weakest since the depth of the financial crisis in early 2009.

However, in the latter months of the year, concerns over slowing growth in emerging markets had begun to ease as economies appeared to bottom out. China was supported by faster infrastructure investment, while the factory sector also showed signs of picking up as inventories were rebuilt.

In 2012 Central banks injected unprecedented stimulus to the global economy in a bid to restore confidence, support liquidity and lift growth.

With interest rates already approaching, or at zero in the major developed economies, more radical action was undertaken. The ECB, US Federal Reserve, The Bank of Japan and the Bank of England all participated in further asset purchase programs.

Many analysts credit these extraordinary measures with boosting investor confidence, even so, central bankers cautioned that they were reaching the limits of what they could do.

All major equity markets gained substantially in 2012. In developed economies the broad MSCI index-ex Australia was up by nearly 15%. Australia did comparatively better, gaining nearly 20% over the year.

While Australia was one of the better performing developed markets, the mood of investors was more defensive. This explains why gains were concentrated in large cap and high dividend paying names like Telstra and the banks. Just five stocks (CSL, Telstra, ANZ, CBA and Westpac) comprised half the market’s gains.

With the resource boom showing signs of peaking and with commodity prices in retreat for much of the year, materials stocks were among the worst performers of the year.

Real Estate Investment Trusts, with their income appeal, were again in demand. In fact, Australian REITs outperformed the wider equity market by a substantial margin, with a return over 30%.

According to the Reserve Bank of Australia, the average one year term deposit rate for $10,000 fell from 5% in January 2012 to 4.15% in December 2012. Across the same period, the average interest rate for a bonus saving account fell from 5.05% to 4.50%. So while many were still clinging to cash – waiting for the right or safe time to re-enter – the market moved quickly and left them in its wake. Again proving that attempting to time the market is a futile exercise.

In the wake of an extremely positive year for equities it’s worth looking back over the past ten calendar years on the Australian share market. With the share market still regularly referenced in ominous terms, it’s interesting to see the market has been positive in eight of the last ten years. Seven of those years have produced double digit returns. 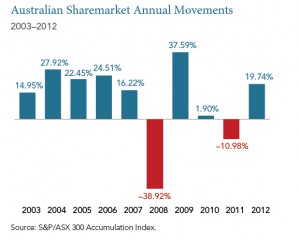 Entering 2012, investors could have been forgiven for continuing to shun risk assets, such was the pall of gloom over global economic prospects.

Uncertainties over the US economy, the political cycle, the future of the European single currency experiment, the longevity of China’s boom, the resilience of emerging markets and a host of other issues gave investors cause for caution.

Instead, we saw a reawakening of risk appetites. While partly due to unprecedented central bank stimulus, the signs of a real recovery in the US and Chinese economies, were also important factors.

Once again, the happiest investors were those who ignored the daily headlines and adhered to the asset allocations designed by their advisers – advisers who understood their clients’ individual circumstances.

Uncertainty will never go away. It is part of risk, but risk is also the flipside of return. We minimise risk by diversifying and paying attention to costs. And we can capture the returns of capital markets by exercising patience and keeping a long-term perspective.

With thanks to DFA Australia