You are here: Home / Budget / The Silver Lining

Uncertainty in Europe, a volatile share market and falling property prices; there has to be some good news! Today I feel a little like Santa Clause for those with large debts as there is a silver lining. With inflation on the way down and predictions of a slowing economy we have now seen interest rates fall two months in a row. Interest rates have now fallen half of a percent, equating to $1500 saving a year or $125 a month, for those with a $300,000 mortgage. With a couple more interest rate falls predicted by a number of economists, do we just ride the gravy train all the way down and hope they stay down long enough to get some real benefit? Or do we take advantage of some very competitive fixed rates and lock them in for a period of time?
We only need to look at history to know that current interest rates are fairly low. As you can see below the Interbank Cash Rate (the interest rate that the reserve bank sets and the banks lend to each other at) has not been below 5% many times in the last 35 years.

The interbank cash rate has only been lower than the current 4.25% once. This was during the first stage of the financial crises when the cash rate bottomed at 3% on the 8th April 2009. 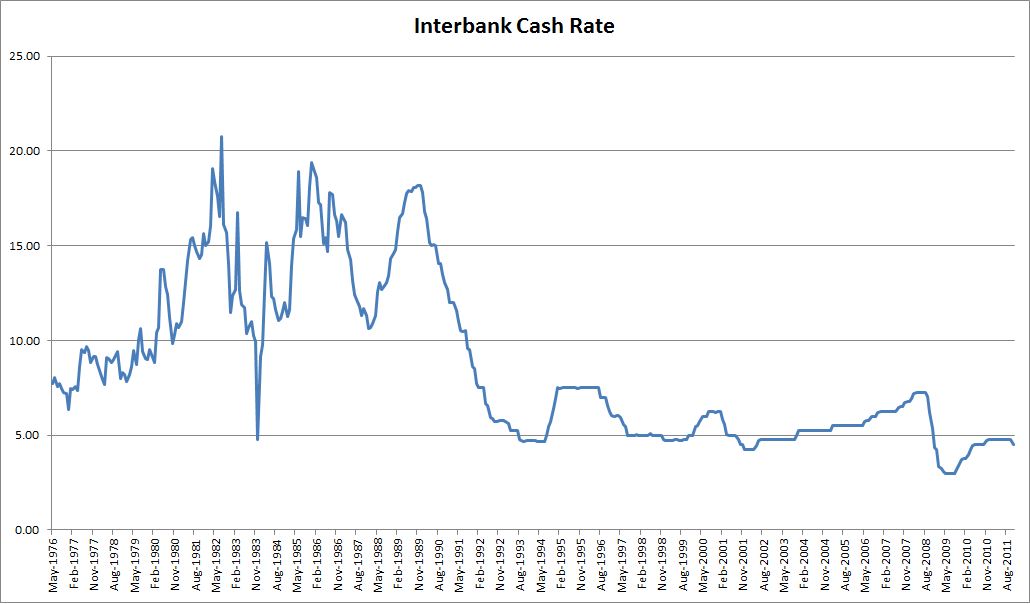 The cash rate fell from 7.25% on the 2nd Sept 2008 to 3% by the 8th April 2009. I guess the question many people will be asking is, how much further have they got to fall now?
Unfortunately no one can predict interest rates with any certainty. Back in February this year most economists were expecting rates to continue going up. The yields being paid for government bonds, (being the best predictor of interest rates) showed a nice, healthy upward sloping yield curve as seen below. 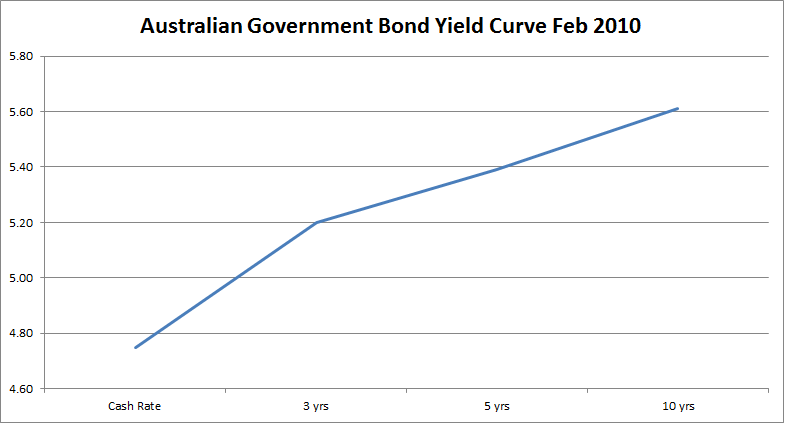 How quickly the story changed however. In June the curve was relatively flat and by November the yield paid on the 3 year bonds was a full 1% below the cash rate, as conditions in Europe worsened. It was therefore cheaper for the Government to borrow over 3 years than it was to borrow for 1 year or 1 day. If banks were able to borrow similarly to the government and charged the same margin on their long term loans as their short term loans, we would be seeing 3 year rates on offer of around 5.25%. 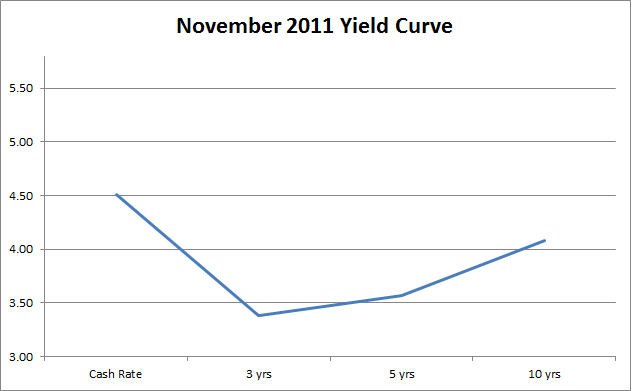 Many of you will be thinking, how does this affect me?  Some banks are currently offering fixed rates as low as 5.75% fixed for 3 years. Many borrowers on a variable rate loan will be paying somewhere in the vicinity of 6.5%. If economic conditions continue to worsen interest rates set by the Reserve Bank will continue to fall. But how much of this fall will be passed onto you through your own lender is difficult to know. Westpac and ANZ have both come out and indicated that their decision, to continue to lower rates, will be a business decision and will not be based on the actions of the Reserve Bank. Unfortunately the yield curve above has little relevance to our banks as most of their funding is completed through offshore borrowing.  ANZ and Westpac have both advised that offshore funding costs are increasing. Smaller banks such as Bank of Queensland, who have recently had their credit rating downgraded, will find raising funds overseas even tougher.
So to sum up, interest rates cannot be predicted with any real certainty and the only thing we know for sure is that the current 3 year fixed rates on offer from as low as 5.75% are very competitive in historical terms.
Fixing your interest rate will provide certainty of your payments over the fixed rate period but you need to take into account the loss of flexibility on fixed rate loans. The variable rate may also fall below that of the current fixed rate and fixed rates offered in the future may also fall below those rates currently offered. Is it likely that variable rates will average lower than the current fixed rates on offer? Only history will tell.

By fixing your entire loan you may also be limited in making extra repayments and you may lose the option of redraw. If you decide to break your fixed rate you may also be up for considerable break costs, depending on the movement of interest rates. Fixing only part of your loan and leaving a portion variable may give you back a lot of the flexibility you require.
If you decide to lock in a low rate now however, there are a few things to take into consideration before calling your current lender and locking in their fixed rate. Fixed rates are very competitive but there is a great deal of difference between the rates offered between the lenders. Fixed rates do not necessarily go up and down with variable rates and they are heavily influenced by the deal the bank receives when raising funds. The sharpest current rate on offer (16/12/11) comes in at 5.75% and the worst at 6.69%. That’s over half a percent difference and amounts to $6750 difference in repayments over 3 years on a mortgage of $300,000. So, if you decide to lock in a fixed rate, it is a good idea to give us a call so we can shop around for you and find the best deal. You also might want to consider locking in your fixed rate to guarantee you receive the rate that you have applied for.  If the lenders fixed rates go up between application and settlement you may receive the higher rate and not the great deal that you applied for. To lock in the fixed rate you want, you may have to pay a guarantee fee.