You are here: Home / Uncategorized / Clear Air is Nice but Don’t Forget the Turbulence

In case you needed a reminder – the sharemarket does go down. It’s worth remembering this in a year which has so far been something of a rarity.

Earlier in the year we highlighted the media and their incessant hectoring about an imminent correction. With nothing much happening in the markets they fell into the need to talk about the potential for something to happen. Gifting generous column space to fund managers and investment talking heads convinced of their relevance.

Six months on and their predicted correction still hasn’t arrived. We’ve even been deprived of any pull back of over 5%.

This is the year to date chart of the ASX All Ordinaries. While it still looks choppy, the movements have been within a tight area. After a few minor ups and downs earlier in the year the ASX has been boxed in a 150-point range since mid-May, leaving us currently up 1% for the year.

In fact, it’s been a bit of a weird one everywhere. Despite Trump’s tweets and the chubby fellow in North Korea shooting his missiles, volatility has evaporated in many major markets, particularly the US.

What does this mean? Nothing, but it’s a new experience for many people because, as shown, financial markets are normally much more volatile than this. For the newer investors, it’s important they don’t get too comfortable with the lack of volatility.

If you like, we could equate investing in equities to flying a plane. If you were a learner pilot you might assume turbulence didn’t exist and your flying hours during 2017 wouldn’t be giving you the best indication of what you might confront in the air.

For the seasoned pilots, you can happily cruise along in the clear air while remembering, despite the patch of calm, turbulence can strike at any time.

It may be next week, next month or next year. No one knows, but understanding it still happens will make an investing journey more palatable. As shown below, the last time we had an intra year decline lower than 5% was back in 2004. As shown right at the end, our biggest pullback this year was 4.7%. 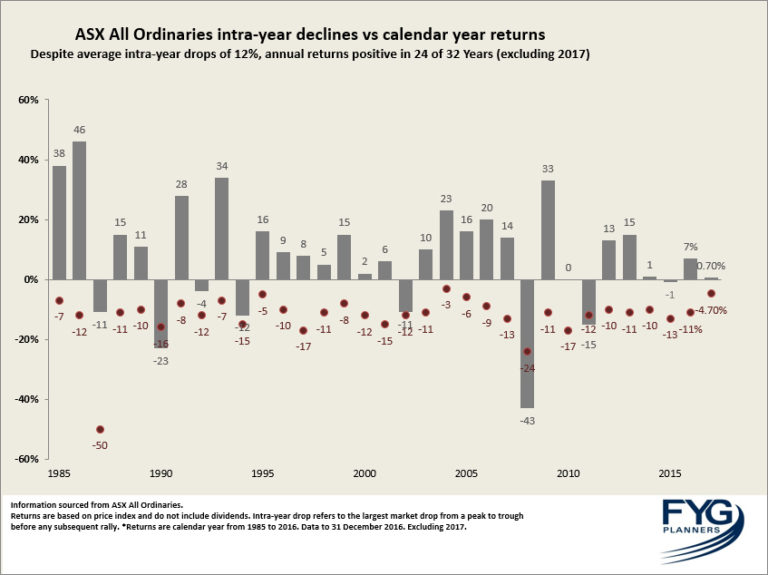 It’s not normal, but you can never accuse financial markets of being predictable.

It’s why you need to expect and accept volatility, maintain a diversified portfolio, rebalance that portfolio when appropriate and invest long term in what has consistently offered rewards.