Global economic data remained encouraging during Q1, though after a long period of relative calm and upward movement volatility again reared its head in equity markets. While towards the end of the quarter the potential for trade wars heated up.

In the US, economic data continued to be supportive. US business confidence reached a multi-decade high in March. GDP for Q4 2017 was revised upwards to show growth of 2.9%, and while industrial activity slowed – as measured by the ISM manufacturing index – it continued to indicate expansion.

The US Federal Reserve raised rates by 25 basis points in March, from 1.5% to 1.75%. It did not, however, alter its overall rate projection of three hikes for 2018. This announcement quelled some concerns, but escalating US-China trade sanctions precipitated a renewed bout of turbulence in March. 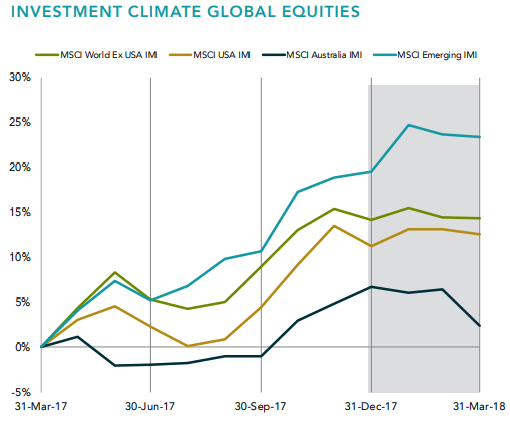 In the eurozone, GDP growth for Q4 2017 was confirmed at 0.6% quarter-on-quarter and unemployment stable at 8.6% in January 2018. However, forward-looking surveys painted a picture of slower growth. The composite purchasing managers’ index (PMI) hit a 14-month low in March and annual inflation was 1.1% in February, below the European Central Bank’s (ECB) target. ECB chairman Mario Draghi noted interest rates would not rise until the end of the quantitative easing program.

While UK economic growth remained sluggish, in its February inflation report the Bank of England nudged up its growth forecast for 2018, from 1.7% to 1.8%. There was further progress with Brexit negotiations, with an initial agreement struck on the terms of a transition period for after the UK formally exits the EU.

The Japanese economy experienced a soft patch in Q1 2018 with many indicators of production and consumption slightly slipping. The most pervasive influence came from the switch in US policy towards increased protectionism. Investors were also taken by surprise by a sudden change in stance of players engaged in discussions on North Korea’s nuclear ambitions.

In Australia, the Reserve Bank left its own benchmark cash rate unchanged for a record equalling 18th consecutive meeting at 1.5%, pointing to strengthening economic growth alongside continued low inflation.

The following outlines the returns across the various asset classes to the 31th March 2018.

It was a mixed first quarter for global equity markets in 2018, with an upsurge in volatility from the very low levels of 2017 a major talking point.

US equities began 2018 strongly, buoyed by ongoing strength in economic data, robust earnings and the confirmation of a major tax reform package. However, the latter part of the quarter saw a marked increase in volatility. Investors first digested the destabilising potential of an elevated US inflation reading and the possibility that the Federal Reserve (Fed) may need to become more proactive in raising interest rates in order to keep upward price pressures under control. 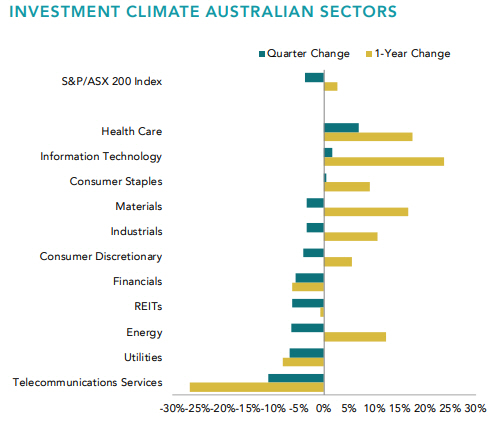 Eurozone equities delivered negative returns in the first quarter, with the bulk of the declines coming in March. Markets began the year on a firmer footing but worries about the path of US interest rates and the outlook for global trade led to declines for the period overall. Sentiment towards UK equities was poor as the FTSE All-Share fell 6.9%. Overseas buyers shunned the market amid ongoing political uncertainty and a weak outlook for economic growth.

After a strong start to the year, Japanese equities followed a similar pattern to other global markets and ended the quarter 4.7% lower. The heightened uncertainty resulted in a stronger yen against major currencies. Corporate results to December 2017 showed very positive trends.

Australia was dragged down by its heavyweight banking sector as the potential impact of the Banking Royal Commission began to weigh. In sectoral terms, the other big losers on the Australian market were telecommunications stocks, utilities, REITs and energy.

If there’s one constant about money, it’s that someone is always wanting to take it from you. As disheartening as that statement is, the quicker investors learn it, and understand who they can and can’t trust, the more secure their financial prospects will become.

Bringing us to the latest financial fraud documentary, The China Hustle.

In the aftermath of the 2008 financial crisis a lot of investors in the US were looking to quickly recoup their losses. At the same time, many Chinese companies were looking to trade on US stock markets, but couldn’t do so directly. Some lower tier US investment banks got involved to help facilitate Chinese companies to list in the US through a backdoor using dormant companies that still had a stock market listing.

Hundreds of Chinese companies found their way onto US markets this way and some big money was being made as share prices surged. Until one US businessman, working in China, decided to investigate a Chinese paper company on behalf of his father who wanted to invest in it.

Orient Paper claimed to be doing $100 million in annual revenue. When the businessman arrived at their factory, he found a run-down operation completely incapable of doing the kind of revenues suggested, nor supporting the company’s market valuation.

And in a story as old as time, the only protection investors had, was the belief in their head that regulators exist to protect them – so no protection at all. The investment banks doing the backdoor listings were also putting buy recommendations on the companies and the unsophisticated individual investor, seduced by potentially high returns, were left holding the bag when the frauds were uncovered.

As one interviewee said, “you’re buying lottery tickets”. And when it comes to individual stocks, Chinese or not, that’s often the case.

In Australia 26 Chinese based companies currently trade on the ASX, only 5 are currently trading above their initial listing price. The ASX has rejected another 21 Chinese companies from listing on the ASX over the past two years.

The China Hustle is available on Netflix.

With thanks to DFA Australia for charts.