On Friday we witnessed a significant event and its real time impact on financial markets. Britain voting to leave the European Union.

Despite a final week “Remain” rally that pushed up equities, commodities and the Australian dollar, someone was clearly reading the tea leaves the wrong way.Financial markets love certainty (Remain) while they hate uncertainty (Exit) and they certainly hate this outcome. However, this is just another bump (or dip) in the investing journey that will likely look remarkably benign when we look back on it in the years to come.

This decade, still living with the lingering aftereffects of the Global Financial Crisis, has seen several market shaking events. The Japanese Earthquake and Tsunami rocked world markets in 2011, while markets were less than overjoyed when the US had its AAA rating clipped by S&P later that year.

And just when investors have started to feel comfortable this decade, ongoing fears about China and Greece would rear their heads to unleash waves of volatility.

But… where was the worst place to be invested?

The old “safe haven” of cash of course. 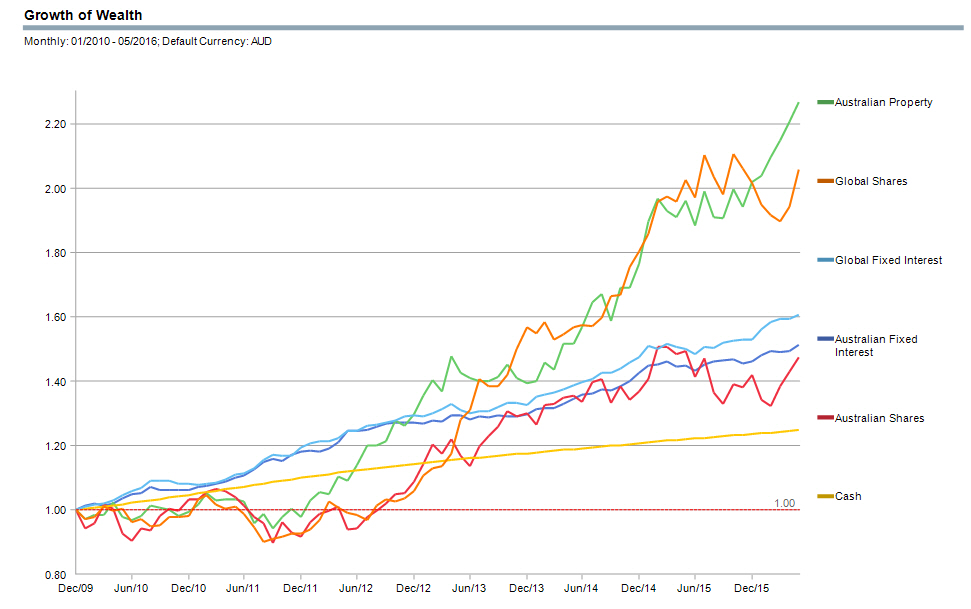 There are some rough moments in there, but Australian listed property leads the way with an annualised 13.60% return, while cash has returned investors an annualised 3.50%. Australian shares have managed an annualised 6.23% and International shares an annualised 11.91%. Anyone ignoring all the market shaking events along the way has inevitably done better than someone who kept themselves safe in cash.

Back to the Brexit.

There’s inevitably more uncertainty to come, but there are some things that are certain.

One thing not mentioned – the referendum isn’t legally binding in any way. The next step will be parliamentary politics. We’ll take up that part of the story from The Financial Times

The UK government could seek to ignore such a vote; to explain it away and characterise it in terms that it has no credibility or binding effect (low turnout may be such an excuse). Or they could say it is now a matter for parliament, and then endeavour to win the parliamentary vote. Or ministers could try to re-negotiate another deal and put that to another referendum. There is, after all, a tradition of EU member states repeating referendums on EU-related matters until voters eventually vote the “right” way.

Despite the celebrations and glum faces we’ll see in the media, Britain can’t just leave the EU tomorrow. The Lisbon Treaty demands a negotiating period with the European Council of up to two years.

Fortunately for markets and unfortunately for the exit voters that’s plenty of time for all manner of goodies and interventions to possibly convince the UK to stay… let’s wait and see..