The scale of China’s economic slowdown and the policy response to it were among themes that preoccupied global markets in the September quarter.

On August 11, China devalued its currency by nearly 2%, a move that fuelled concerned about the success of China’s efforts in rebalancing its economy from investments and exports to domestic consumption.

Given China’s substantial demand for iron ore, coal and other raw materials, concern about its slowdown was cited as one possible factor – alongside supply issues – in driving down commodity prices, resource stocks and related currencies like the Australian dollar.

In the US, China’s slowdown was cited by the Federal Reserve as they delayed an anticipated increase in interest rates. Despite this, Fed governor Janet Yellen said she still anticipated an increase before the end of the year. Central banks elsewhere also maintained accommodative interest rate policies for similar reasons.

Across the Atlantic, data showed a recovery in European business sentiment. In August, Greece, secured a third bailout from its creditors in return for promising to carry out economic reforms. 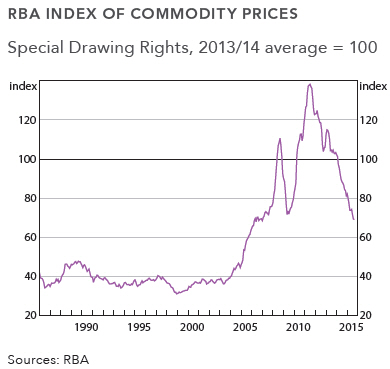 Late in the quarter, the emergence of the Volkswagen emissions scandal raised concerns at the impact on the German economy. The car marker, whose CEO quit over the rigged emissions tests, is one of Germany’s largest employers.

In Australia, the commodity downturn hit resource companies and resource rich regions like Western Australia. With the economy slowing and inflation contained, the Reserve Bank kept the cash rate at 2%, where it had been since May.

The following outlines the returns across the various asset classes to the 30th September 2015.

Exxon Mobil Chevron, Glencore and BP were among the biggest drags on global equity markets, though there were positive contributions from some technology and consumer names such as Amazon, Google, Facebook, Nestle and Nike.

Unsurprisingly the weakness spilled over into commodity related currencies, with the Brazilian Real, South African Rand and Australian Dollar among the worst performers against the US dollar.

Fading expectations for inflation made for good bond returns, with longer-dated government bonds posting their biggest quarterly gain of 2015, while the search for yield in a low interest environment helped to lift listed real estate. Again, more evidence of the benefit of diversification – as local shares sunk, other asset classes behaved in a completely different fashion.

On the Australian share market, energy companies like Santos and Origin were among the worst performers, though merger activity boosted some industrials like Asciano and Treasury Wine Estates. Qantas, continuing its turnaround and benefiting from low oil prices, posted strong gains.

In New Zealand, it was a similar story to Australia, as the local share market also posted its worst quarterly performance in several years, but NZ bonds posted strong quarterly gains.

Was there a time without volatility?

It’s been a volatile year, apparently.

The market has moved around quite substantially and the media has been on the scene to remind us about it. If there’s one constant that keeps the media in business it’s retelling an old story and trying to tell us it’s fresh and relevant – curse our short memories!

If we could remind ourselves how common and ultimately uneventful market volatility and most corrections are, we’d endure a lot less stress when investing. With that in mind, to highlight how the worst periods during a year are often markedly different from the whole year, we’ve put together a 30 year chart of the ASX highlighting intra-year declines vs. full year returns. This chart underlines the danger of reading too much into a temporary correction and taking action based upon it. Significant drops happen at least once on a yearly basis and if we take the worst declines (those included for this this chart), they average 12% down before the market forms any type of recovery.

There are a few things to note. Firstly, on three occasions the yearly return was worse than the worst intra-year decline measured. A 10% fall can happen in a short period of time; from there the market may form a small recovery or trade sideways over a number of months. From that point if it starts another fall it will inevitably drag the yearly return lower. Thankfully the fall/reprieve/fall scenario has only occurred three times in the last 30 years.

Secondly, even good years will suffer rough declines. 2012 and 2013 produced solid double digit returns, but at one stage during both of those years they suffered double digit peak to trough falls before recovery. And take 2009, as the world reeled from the financial crisis. The ASX had hit a double digit decline by early March, something that would have most investors questioning their strategy to stay the course, but from that point the market staged a remarkable recovery and finished the year 33% ahead.

If you’re a long term investor it’s just another reminder that there’s nothing to be feared from a correction.

Now the following chart isn’t the art work of an indecisive snail that fell into an ink pot, it’s just further evidence volatility is nothing new. The combined lines are three ASX charts from 2013, 2014 & 2015. They are through till mid-October and the charts are deliberately untagged and in no particular order.

Despite the media playing on the idea that “volatility is back in 2015” it appears hard to identify any real difference in volatility between the three charts. Volatility has neither remerged, nor has it been absent in any of the charts. There are roaring ups and downs, with little smooth sailing to be found. 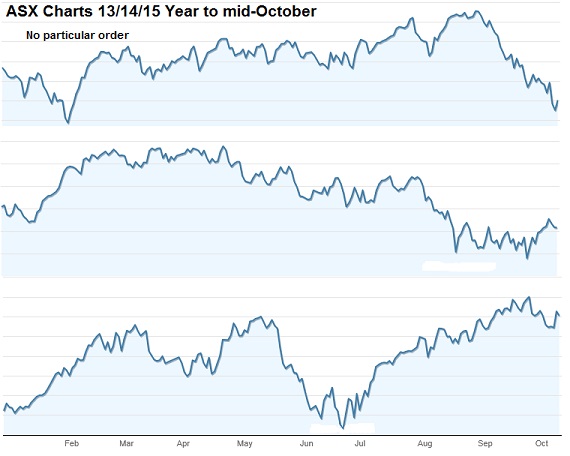 Has it really been a volatile year or just a normal one? In truth it’s been both – markets are always volatile and that’s normal.

With thanks to DFA Australia.